Vellore or North Arcot district as it was previously called, has been a witness to the rule of many dynasties and political developments. During the 9th century, the Pallavas had considerable influence in this region. Their reign continued till 899 A.D. A village Udayendiram owes its name to one of the Pallava rulers.
The stone inscriptions found in this area stand as testimony to the rule of Cholas here. These stone inscriptions have been found in Pallikonda, Virinjipuram, Madanur and Poigai. Chola kings ruled from the 8th to 13th century. Sambuvaraya kings were petty rulers under the Chola kings. 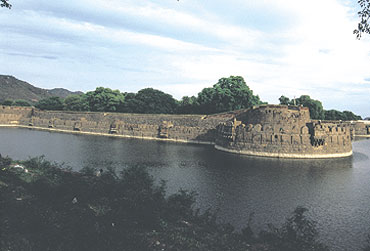 The fort was captured by Robert Clive in the year 1751. This was the beginning of British rule in North Arcot district. The British defeated the French in Wandiwash (Vandavasi), which further established the supremacy of the British.

In 1772, the British attacked Sivagangai. However, the Marudu Pandia brothers who fought against the British had to seek refuge at Dindugal under Hyder Ali. But in 1780, the British gave back Sivagangai to Velunatchiyar.

In 1801, Marudupandiars brought together the Tamil kings and protested against British rule. In 1806, the Indian soldiers were ordered to wear turbans and leather boots and were forbidden from wearing earnings or use  holy ash (Tirunir) on their forehead. They revolted against the British but were brutally forced to subjugation. Many Indian soldiers died as the British had modern weapons. This is believed to be the first up rise against British rule and is referred to as Vellore Mutiny.

The Vellore Mutiny started on 10 July 1806. This was actually the first time that Indian sepoys rose against the British. The sepoys killed British officers and soldiers. Colonel St. John Fancourt, the commander of the fort was also killed.

Causes of Vellore Mutiny were many - The dress code of sepoys was changed, Hindus were not allowed to put religious mark on forehead, Muslims were ordered to shave their beards and trim moustache and Commander-in-Chief of Madras Army General Sir John Craddock ordered Indian soldiers to wear round hat instead of traditional turban. Introduction of Greased Enfield rifle cartridges made of beef and pig fat had to be torn off by mouth before being loaded. This really offended Hindu and Muslim sepoys.

Tipu Sultan's sons were also instigated to join this rebellion. Those who protested were punished with lashes and dismissed from the army. They had to seek pardon from officials of East India Company.

But this agitation was suppressed by the British. The garrison in Arcot was alerted. Sir Rollo Gillespie with his relief force arrived in Vellore. Indian sepoys were subjected to harsh retribution which led to killing of 350 rebels and equal number of sepoys were wounded.

Senior British officers who had passed dress regulations were called back to England. William Bentick, Governor of Madras, was recalled. It is believed that the Vellore Mutiny was the first uprising against the British rule in India.

You will find it interesting to know that the only surviving eye witness of Vellore mutiny is Amelia Farrer, Lady Fancourt (the wife of St. John Fancourt, the commander of the fort). She survived along with her children, but her husband was killed. She has given the true account of her experience in her write-up in The Sydney Gazette of June 14, 1842. English poet, Sir Henry Newbolt's poem ''Gillespie'' also gives an account of Vellore Mutiny. A few lines from this poem: 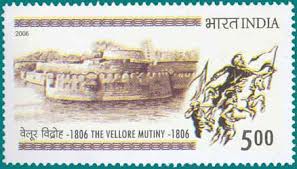 There are a number of stamps that have been printed by the Government of India on institutions and monuments of Vellore. That is to say, Vellore does have a strong 'philatelic presence'!

There are stamps on Vellore fort, CMC medical College and Hospital, Voorhees College, Forts of India with picture of Vellore fort and stamp on Vellore Mutiny 1806 etc.

Even today, yearly exhibitions of rare old coins released by various dynasties and stamps are displayed to create an awareness among people about history of Vellore. Coins ranging from mohurs released by British to Panam, 2-Panam, 5-Panam, kaal varagan, arai varagan are displayed for everyone to see and even buy.

In Vellore, there is The Numismatic & Philatelic Association of Vellore Fort (NPAV) and Udhavum Ullangal which jointly organize such shows.

Explore more about History of Vellore