There is nothing as sweet as independence. But if you infringe the right of others to live happily, follow an unlawful path causing harm to others, than the society has to be protected from your wrong actions. If the crime is committed, you land in prison. The worst part of being in prison is that your independence is lost, you dread your punishment and are away from your family for long. Also, since you are given just a number, your personal identity is lost too.

The good news is that jails today believe in rehabilitation so that once released, the convict can go back and join the main stream of society. For this purpose, the inmates in jail are taught some skills. 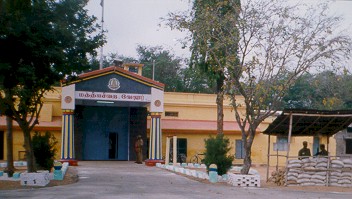 Vellore Central jail is the largest jail in the district and second largest in Tamil Nadu, after Puzhal Central Prison. It is modernized and fully computerized. The jail inmates excel in weaving and make clothes, choir mats, carpets etc. These are even sold in England! The inmates also learn skills such as carpentry, brass and iron work, making of tents, shoe making etc.

If the conduct of a jail inmate is satisfactory, and he works hard in his work, remission not exceeding 1/6 of the total period of imprisonment may be awarded to him. Under-trial prisoners are kept in sub-jail adjacent to the Central Prison. From here, they are sent to court with Police escort on the date  of hearing in the court.

For additional security, the jail is surrounded by live wiring fence to prevent convicts from escaping. Some of the well known freedom fighters, Presidents and Prime Ministers have been to Vellore Central Jail. V.V.Giri, R.Venkataraman, C.N.Annadurai, K.Kamaraj, C.Rajagopalachari and Vinoba Bhave have been to this jail.

There is a separate prison for women convicts. Here, the women learn various skills so that once released, they are able to amalmagate in society with dignity and may be able to fend for themselves and their families.

However, training in handling weapons, administration of jail and convicts etc. is of primary importance. For this purpose, there is a centre in Vellore where guards are trained.

Murugan and Nalini, who were awarded life term in Rajiv Gandhi assasination case, were also put behind bars in Vellore Central Prison. In 2010, Nalini was shifted to Puzhal jail near Chennai.


District Jurisdiction of Jails in Vellore

National Informatics Centre (NIC)  has developed software for Vellore prison and requisite training has been imparted to the staff for operating it. Video Conferencing facility helps prisoners from the hassle of attending hearings in court, untoward incidents like escape of prisoners during transit and also expense on police vehicles and escorts.

Explore more about Administration in Vellore