Vellore is well known for its educational institutions. India’s top medical institute Christian Medical College & Hospital is located in this south Indian city. Apart from its technological institutions, parks and temples, Vellore has much more to offer to its visitors. 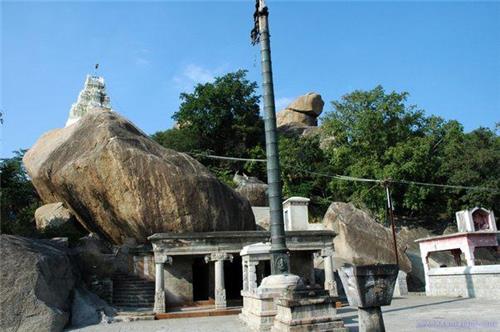 Vallimalai in the Katpadi taluk of Vellore district is a small village well known for its temple of Lord Subramanya. The village is at a distance of 30 km from Vellore and is easily by road. It is believed that the Lord Murugan married his wife Valli here in this place.

The story goes that a drop sweat from Goddess Lakshmi fell down on the grass when she was dancing to distrub Lord Vishnu from his penance. Then a deer consumed the drop of sweat along with the grass. After some time a baby girl was born to the deer because of that drop of sweat. The baby girl was named Valli and was brought up by the chief of the tribe. She grew up to be a beautiful young lady.
Narada muni told Lord Subramanya abot Valli. Lord went to see the girl and fell in love with her. His attempts to impress valli failed after which his brother Lord Ganesha helped him to win the heart of Valli. One fine day Valli elopes with Lord Subramanya from vallimalai and settle down in Thirutthani (Thanigai). But as Vallimali is the dear to Valli, on her request Lord Subramanya along with Devayanai  and Valli live here for eternity. A place called Thirupugazh Ashramam on the top of Vallamalai still continues the tradition of valli.

The Kings of Pallavas during their regime in this region built a rock cut Subramanya temple in Vallimalai that is dedicated to Lord Subramanya. This temple is now included in the list of monuments of national importance in the state of Tamil Nadu.
Under the hill is the temple of Lord Vishnu who came to Vallamali to see his daughter Valli in the form of a saint. The temple Sri Thenvenkatachalapathy temple is dedicated to Lord Vishnu in the form of saint. The temple opens at 7:30 in the morning and closes at 12:30 in the afternoon. Again the door of the temple open for devotees at 2 PM and the last darshan of the Lord can be taken at 6:30 in the evening after which the temple is closed for the day.


Importance of this temple

The specialty of this temple is that here the Sadari blessing to the devotees is given with the pada (feet) of Lord Vishnu as it is believed that Valli performed hard penance here for Lord Vishnu to get his permission to get married to Lord Subramanya. And the Lord Vinayaka of this temple is known as Varasiddhi Vinayaka.
People who are facing the ill effects of planet Mars – Sevva in their astrological chart, come here on Tuesdays and pray to Lord Murugan with garlands made of red flowers and offer curd rice to Lord as Nivedana.
Devotees whose wishes are granted are supposed to offer honey and Thinai corn flour as Nivedana and perform abhishekam to Lord Murugan. As per one’s capacity, they are also supposed to offer vastram (cloths) to the Lord.
One can see the sacred Vengai tree in this temple. It is believed that once when Valli and Lord Murugan were meeting secretly, Valli’s father came there unexpectedly and on seeing the couple changed himself to Vengai tree.


Festivals of the temple

Float festival is celebrated in this temple with great enthusiasm for four days. Women celebrate this festival going around the path made on the hill and offer jiggery, cereals, rice, coconut, fruits and clothing to Valli. Every year, in the tamil month of Masi that falls in February and March on Poornima (the day of full moon) Valli Kalyanam (Valli wedding) is celebrated.
Then next big event is Lord Muruga-Deivanai wedding that is celebrated in the month of Skanda that falls in October-November on the day of Sashti .this celebration is followed by the four day float festival.

Deep in the jungle that surrounds this temple, one can see places where Valli drove the birds so that she can save the crops, the spring where she took bath, the place where she grounded turmeric every day for taking bath and the place called Kumari theertham where Lord Murugan drank water to quench his thirst. You need to take a guide to see these interesting places. Else you will get lost in the jungle.