Vellore is one place which is more visited by students and patients than sole tourists! However, once in Vellore, every individual who has come here will agree that they are more than delighted to have seen Vellore fort and the magnificent Golden temple along with the fort museum and many other beautiful temples. Above all, Vellore stands for physical and spiritual well being.

Reaching Vellore is quite easy as it is well connected with all the major towns and cities. This has led to rise in trade and commerce too. 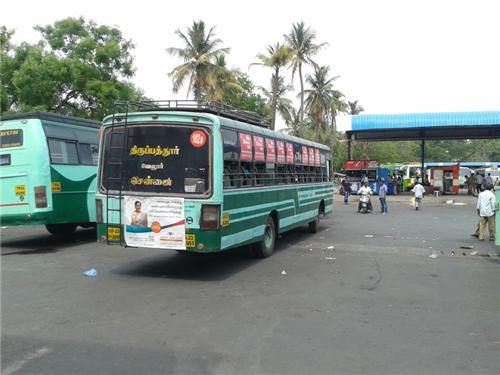 There are 3 Highways passing through this fort city - NH-46, NH-234 and NH-4. These connect Vellore to important cities in Andhra Pradesh, Tamil Nadu and Karnataka. Vellore city itself is situated on National Highway NH-46 that connects Bangalore and Chennai. Golden Quadrilateral is the longest express highway in the country. It has made commuting from Bangalore and Chennai to Vellore really easy.

Buses are available from Vellore to Bangalore, Chennai, Tirupati, Salem, Chittoor, Mysore, Madurai, Kanchipuram, Kurnool, Thiruvannamalai and Trichy. You can get buses for most cities and towns in Tamil Nadu and other states from Vellore New bus stand.

The main bus stand (near Palar Bridge) is just 5 kms. from Katpadi junction. Here, you can board Tamil Nadu State Corporation owned buses or even private buses. The difference is in the fare, though not much. Buses ply to cities and towns in Andhra Pradesh, Tamil Nadu, Karnataka and Kerala from here.

It is not at all expensive going from one place to another in Vellore. Much to your delight! Public transport is jam packed during peak hours, so it is better to opt for private transport such as auto rickshaw.

Getting around Vellore is relatively inexpensive and easy. At peak office hours it is advisable to rent private transport to avoid over crowded public transport. Katpadi and Bagayam are two junctions for buses in Vellore and you can definitely get a bus for any place every 5 minutes. Great service indeed! Katpadi to Bagayam is around 13 kms. and the entire city is covered within this stretch.

Both  Old Bus Stand and New Bus Stand too lie within this route. You can board on buses from these bus stands in case you have to travel to other destinations in Vellore district.

Taking an auto rickshaw is a good idea to travel in the city. You will have to shell out a little more than what you will pay for a bus ticket (INR 4.50 for max. distance). Autos charge about INR 10-15 per kilometre. Taxis are not very common means of commuting in this city. But you can find them in Katpadi junction. They are comfortable modes of transport to travel to tourist places outside the city. Hotel's and travel agent's can help to arrange for taxi service for you.

If paddling comes easy to you and you just intend to travel alone, how about hiring a bi-cycle? It is a great idea to get the feel of the place and much easier too! And economical. Rent is charged on hourly basis or per day.


Travelling to Vellore by Train

There are two Railway stations in Vellore --- Katpadi Junction and Vellore Cantonment. Most trains halt at Katpadi Juncion. You can board trains going to Chennai, Coimbatore, Tirupati and Bangalore etc.

Katpadi railhead (on Chennai-Bangalore-Mumbai line) is just 6 kms. from Vellore. Board a train from here and reach Vellore.


How to Reach Vellore by Air

Chennai airport is the nearest airport from Vellore. From here, you can board a bus or train coming to Vellore.