Places to Visit in Vellore

Vellore is famous for medical tourism due to presence of Christian Medical College and Hospital and is an educational hub as there are many Government and private colleges imparting professional education. However, Vellore is more synonymous with Vijayanagar fort and Sripuram Golden temple.

There are so many temples of Lord Murugan in and around Vellore that you will be astounded to witness the varied architecture of all these temples --- some excavated, some cut out from big rocks, some that were actually part of interior fort premises and some absolutely modern! Look out for spiritual, architectural and an educational extravaganza! Isn't it true that “Prayer is making space available for God to do beautiful things with your life.”

Being well connected by rail and road, it is easy to reach Vellore gifted with sparkling waters of Palar and Ponnar rivers which satiate the water requirements of the denizens of this city as well as industrial houses.

Best time to visit Vellore is sometime between the months of October and March. During this time, the weather is pleasant and you will enjoy your trip to this city. March, April and June are hot summer months when temperature ranges between 29oC to 40oC. July, August and September is monsoon season here when you will have to carry your umbrella as a constant companion! Winter is manageable if you carry warm clothes with you. The temperature during winter months from November to February ranges between 22oC to 32oC.

A visit to Vellore is both a spiritual and historical experience when you visit the Vellore fort. There is a museum also in the fort premises which will leave you spell bound with old and intricate artifacts displayed for visitors. 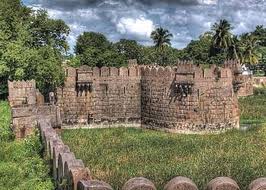 To commemorate coronation of King George V, Clock Tower was constructed in Vellore. It also reminds us of English soldiers who lost their lives during World War I. Tipu and Hyder Mahal is located in the Vellore Fort premises. It was opened for general public in the year 2006, as part of the bi-centenary commemoration of Vellore Sepoy Mutiny.

Kailasagiri is about 10 kms. from Ambur and is known for Murugan temple situated amidst streams of gushing water. You will witness ruins of a fort telling the tale of glorious years of rein of the Nawabs.

Sripuram Golden Temple (8 kms. from Vellore bus terminal) is the temple dedicated to goddess Mahalaxmi. About 1,500 kg. of gold has been used to construct the idols and covering of the temple. Hence, it is called 'Golden temple'. 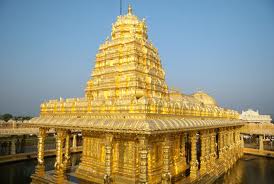 The temple shines and looks like being located on a heavenly abode in the evening as the colourful lights shine and add to the sheen!

Sri alakandeswarar temple comprising of gopuram and mandapam lies inside the fort. The fort is also enriched with the presence of a church and a mosque. Another temple in Vellore, known as Ratnagiri Murugan temple, was built in the 14th century.

St.Johns Church is believed to be one of the biggest churches in Southern India. It is more than 100 years old! In the Cathedral of the Roman Catholic Diocese, there is a bell tower which is the highest in whole of India! The ambiance in the cathedral is very serene and peaceful.


Hills, Lakes and Waterfalls in Vellore

Jalagampaari waterfalls (17 kms. from Tirupattur), is a nice picnic spot. Murugan temple beside the waterfalls makes for an exuberant experience. Love to go out trekking? Head straight to Elagiri Hills and enjoy in the lap of green lustrous surroundings amidst nature.

Punganoor Lake is a man made lake near Vellore. It is located on Yelagiri Hills and has a 15 ft. high musical fountain. You can enjoy boating with your family and friends here. The garden and park for children add to the beauty of the place with a path 1 km. in length for strolling purposes. And the zoo nearby will add to your thrill! Come and enjoy trekking and yes! bird watching here. You can also visit Jalagamparai Falls or go trekking on Swamimalai Hills.


Tourist Attractions for Children in Vellore

We all have a little child within seeking a bit of fun and frolic. Isn't it? Come and have a look at real birds and animals and marvel at the beauty and creation in nature! Amirthi Zoological Park is the place to go. Hey! there you have a spotted deer, wild cat, fox, duck, eagle and hedge dog, and the beautiful peacock, the crocodile, mongoose and the big python!

If you want to have a glimpse of the life of princes, visit the French Bungalow. It was constructed by prince of Mysore state Srinivasa Iyer.

Thiruvannamalai is just 85 kms. from Vellore and is known as a Shaivite town. Deepam Festival in the month of Karthigai (November) is very popular here and attracts devotees from far and near. Eswar temple and Girivalam are places worth visiting.

Balamathi is known for Balamurugan temple which is about half an hour drive from Vellore city. Ratnagiri temple is also dedicated to Lord Balamurugan.Tamil month of Karthigai (November-December) is reserved for special worship when the idols of Murugan and his wives are adorned with gold and silver and mounted on a beautifully decorated golden chariot.

Sri Selva Vinayanagar temple is just 3 kms. from Vellore and is located in Shenbakkam. The idols of Sri Selva Vinayagar and Somasundareswarar are kept in this temple. Kangeyanallur is famous for Subramanyar temple. It is believed to be about 500 years old temple! 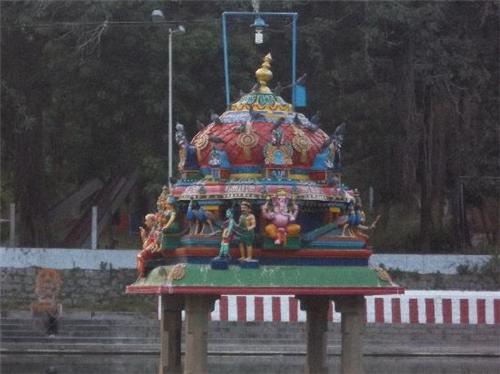 Vallimalai Subramanyar temple is a rock cut hill temple, which is situated on the slopes of Javvadhu Hills. Palar river flows nearby. Kanchanagiri (7kms. from Ranipet) is known for Siva temple shining bright on a plateau encompassed with hills on all sides.

Kankeyanallur village boasts of Sri Kangeeswarar temple built by the Chola rulers.Mahendravadi village has a cave temple that was excavated out of a big rock. Palamathi hills too houses the Murugan temple, a modern temple, at a distance of 14 kms. from Vellore.

Pallikonda has a temple of Sri Ranganathaswamy and going by the inscriptions, this temple was built in 10th Century. The temple was originally housed inside the fort but owing to its dilapidated walls, it is accessible from outside now. Ratnagiri is 13 kms. from Vellore. People visit the Murugan temple on the hill top which was built in the 14th century AD.Shenbakkam is famous for the temple dedicated to Sri Selva Vinayagar and Somasundareswarar.

If you have a couple of days to spare for sight seeing, you can also visit Chennai (122 kms.), Bangalore (206 kms.), Kanchipuram (61 kms.) or Thiruttani (31 kms.)  Erukkampattu is a small village visited due to presence of a temple dedicated to Lord Vishnu.

Vellore serves not only as a holiday destination but as a medical destination as well. It has hotels to suit the pockets of all kinds of travllers. So if you are travelling on a shoe-string budget or plan to have a luxury stay, Vellore has it all!