Vellore is known all over the world for specialized medical treatment by CMC, Vellore. Patients come from far and near with the faith that they would be alright. Not only in the field of medicine, but also in the realm of business, Vellore is making waves by contributing a significant percentage of leather goods exported from India.

However, with the passage of time, the population of this city has increased and the number of leather and leather based industries too has multiplied.

Steps have to be taken to curb land, water and air pollution in Vellore caused due to tanneries. Proper methods for disposal of effluents has to be carried out to keep up leather production in the district. Focus has to be drawn on sustainable development than destruction of ecology in the region. It is time to look into this problem seriously so that a treatment centre like Vellore is not itself indisposed for want of treatment!

Tanning is the process of converting animal skins into leather. This is carried out in tanneries which are small scale industries. There are hundreds of tanneries in areas around Vellore.


History of Tanneries in Vellore

Chennai (earlier known as Madras) was a trading and export centre of raw of skins and hides during British rule in India. The Dr. Seetharamiah Committee, set up by Indian Government in 1973, recommended ban on these goods. The government also discouraged and restricted export of semi-processed leather. This is where setting up of tanneries began in India.

Most of these tanneries were constructed near Chennai and in nearby cities. Incentives by Government and employment opportunities for people living nearby was enough incentive for more and more tanneries to mushroom here.

Vellore, known as North Arcot district at that time, too witnessed growth of leather industry in the region. Palar river met the fresh water requirements of these tanneries, functioning as small scale industries. 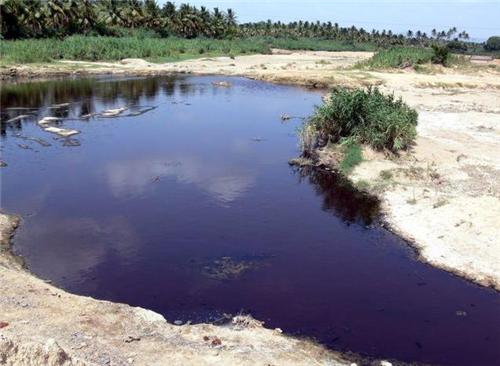 Disposal of Effluents from TanneriesThere are hundreds of tanneries stretching from Vaniampadi to Ranipet. Most of these do not have effluent treatment plants. Some industries empty out effluents in Palar river bed. Also, the river water is being used up by these tanneries. Some tanneries get fresh water by tankers. New tanneries are opening everyday and the focus is on how to increase production without heeding on measures of environmental conservation.

Palar river, when dry, is a source of sand for business enterprises. As it is a seasonal river, it is dry most months of the year, excluding in monsoon season. The level of river pollution can be gauged by the colour of water which is not fit for drinking. Earlier, this river was a source of portable drinking water for people residing in localities such as Ambur, Vaniampadi and Ranipet. The stench from tanning process has giving rise to air pollution as well.

According to Ministry of Environment and Forests, Common Effluent Treatments Plants (CETPs) can solve the problem of dumping of effluents from industries. It is important that CETPs function efficiently, without leakage of toxic sludge which would contaminate the soil.

The Supreme Court Monitoring Committee (SCMC) too has advocated the option of having secure landfills Instead of releasing these effluents into rivers or agricultural lands. The industries are bound to follow the Hazardous Waste rules.

People in rural areas are occupied with weaving, match stick making rather than farming. Most farmers are of the opinion that their crops fail due to water laden with chemicals. Such contaminated and exceedingly saline water causes skin ulcers and emanates foul smell. One can witness white residue after this water dries up in the fields.

Today, there are reports of ground water being contaminated. Tamil Nadu Pollution Control Board is concerned about dumping of hazardous wastes in Vellore.

The United Nations Industrial Development Organization (UNIDO) is operational on environmental hazards caused by tannery industries. The Central Leather Research Institute too is functioning in this field and has put forward ways of preventing pollution from tanning. One of them is minimal use of water in tanning process (dry tanning technology), recovery of Chrome from the effluents, setting up of CETPs as most of these small scale tannery industries cannot do this on their own.

One of the possible solutions is use of sea water (Tamil Nadu has long coastline), but this is not permissible according to process parameters. This would entail desalination of sea water which would require energy and increased costs. Waste heat from power plants in the state could be used to cut down costs of energy. The recovered salt could become another source of business! However, for this purpose, it may be essential that the tanneries be relocated along the sea coast, so that costs of transporting the water could be minimized. This will take some time but is indeed a feasible solution.

Where there is a problem, there is also a solution. The following suggestions can go a long way to control and even eradicate pollution of water and air in Vellore due to tanneries:

The tanneries near Vellore have contributed to the economy of Vellore district. Vellore is famous today as a major contributer of leather products exported from India. Timely intervention is required from Government, tannery owners and environmentalists to find a balance between industrial development and environmental conservation.


Explore more about About Vellore