Rivers and Dams in Vellore

Rivers serve the purpose of making drinking water available to the denizens of Vellore. The are many wells too to tap underground water. The tanneries in Vellore too require water and now depend on tankers for the same.

You must have heard this quotation, “In rivers, the water that you touch is the last of what has passed and the first of that which comes; so with present time.” 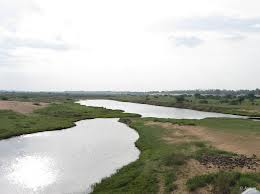 Rivers and Dams in Vellore

Palar river has its origin in Nandi hills situated in Kolar district of Karnataka. It flows elegantly touching states of Karnataka and Andhra Pradesh before its confluence in Vayalur (100 kms. from Chennai, towards the South) into the Bay of Bengal.

There are seven tributaries but Cheyyar river is the main tributary. Throughout its long journey, the river flows as an underground course or 'Guptagamini' and appears near Bethamangala town. The river gains speed here further flowing down the Deccan Plateau. Vellore, Kanchipuram, Walajapet (Anaicut), Arcot, Vaniyambadi and Ambur are all situated on the banks of Palar river.

When the Andhra Pradesh Government came up with the proposal of constructing a dam across Palar river, it was met with agitation in various neighbouring states. They believed that Palar river is an interstate river and hence as per clause in Interstate River Water Disputes Act 1956, 'the upstream state should not build any new dam or structure to obstruct, divert, or store waters of the rivers without the consent of downstream state.'

Kosasthalaiyar River (or Kortalaiyar river) has its origin near Kaveripakkam (Vellore district) and it drains into the Bay of Bengal. At Tamaraipakkam and Vallur, there are two check dams across the river.

Level of water in the river is controlled by Vallur Anicut check dam near Minjur. It was proposed by the Water Resources Department (WRD) to construct the Bandikavanur check dam. Mordana dam is yet another dam near Vellore.

The dam is situated 8 kms. from Gudiyatham town near Vellore. It is a picnic spot. The dam has been constructed between two hills, dotted with greenery on all sides.

This is a place for those who love to enjoy the peace and serenity that natural surroundings have to offer. It is advisable to go here with your family and friends to make your trip more enjoyable. A relaxing place indeed!

Other Lakes in Vellore are Mannur Lake in Tindivanam, Kaanaru Lake and Tharapadavedu Lake in Gopal Samuthram in Vellore. Nearly 2 kms. from Vellore is Northen Dyke Great Thorapadi Lake in K.V.Kuppam.

Rivers and lakes are the lifeline of any state. The Palar River is an important river in Tamil Nadu and all efforts should be made to keep it clean and pollution free. Only then is sustainable development possible with industrialization today.

Explore more about Geography of Vellore