Prayers and belief - yes, this temple is about going up the hill at around 750 feet to offer prayers to Lord Narasimha! That's not all. This also includes climbing around 1,305 steps to reach the temple. Well, for those who are physically challenged or too old for such an adventure, there is good news. You can avail of the 'doli' service which is carried by a couple of men with the you sitting on the seat in the centre. 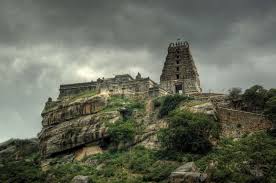 Sholingur was known as Thirukkadigai in olden days as according to a legend, sage Vishwamitra worshiped Narasimha for around 45 minutes here and attained the Brahmarishi title. 'Kadigai' means approximately 45 minutes.