One can be entertained in various ways. In a city like Vellore one can have a relaxed night out or evening with friends and family either in a movie hall or simply by taking the children out to a restaurant or any entertainment park. Movies create all the magic, taking the viewers away from the daily grill of life ... into the dreamy land where all thigs are bright and beautiful. Yes! three hours of ecstasy is total entertainment which comes in plenty in Vellore as there are a dozen movie halls or theatres here! Pubs in Vellore include Escape bar in Vellore bazaar and Cheers Bar in Sipcot.


Places for Entertainment in Vellore

Visiting the Fort Museum in Archeological road in Vellore is also a grand way of entertaining yourself and your family with a tinge of education. For those interested in history and architecture, this is indeed an interesting monument to visit. This is actually an important landmark in Vellore city.

The Vellore fort was built in 16th century and will narrate to you the past history of this small city which has been ruled by a dozen rulers. The fort houses a church, a mosque and a temple with intricate carvings. This is the place where the first rebellion against the British started in 1806.

The Clock Tower in Vellore was built in the memory coronation  of  king  George V.  It also pays homage to 22 English soldiers who fought from Vellore in the first World War (1914-1919).


Entertainment Centres for Children in Vellore

Entertainment centres for children include Fun Planet in Katpadi Main Road, Gandhi Nagar (Near Kumaran Hospital) and Speedmax Game Centre in Sankaranpalayam. You need an entire day here as children will have lot of activities and fun to choose from! Video games, rides and...more!

Kavalur Observatory too is for those fond of spaceships. It is situated in Kavalur in Javadu Hills (in Alangayam), Vellore district. This place is closer to the earth's equator in order to cover both Northern and Southern hemispheres with equal ease. 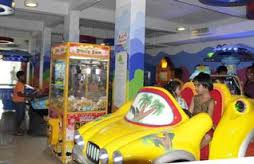 For those who cherish to have a look at animals and birds outside their text books, Amirthi Zoological Park is the place to vouch for. It is a zoo about 27 kms. from Vellore city. You will love to watch spotted deer, foxes, reason monkeys, red headed parrots, tortoise, peacock,love birds, crocodiles, hedgehog, eagles, mongoose, ducks, pigeons, wild cats and parrots, rabbits and pythons.

Do keep a little 'golu' doll which is locally made, as a mark of remembrance of your visit to this city.

There are surprisingly a number of small and big movie halls in Vellore. Movie enthusiasts visit cinema halls to view the latest Bollywood block buster. Tamil movies too have many takers. Watching movies is the main source of entertainment here. Being a medical treatment hub, this is a nice and cheap way to divert the mind from day to day worries and enter the fairytale world. Big Cinemas has made its presence felt in Vellore too, with its state-of-the-art cinema hall and where students and youth too love to flock around.

Other cinema halls in Vellore include Blue theatre in Sainathapuram, Apsara, Big Cinemas Alankar, Silambu Kural and Ragavendhra on Bangalore road and Srinivasa cinema hall in Sathuvachari. Clubs in Vellore are Vellore Press Club, Ladies Recreation Club in Kosapet, Gandhinagar Ladies Club and Lions Club of Gudiyattham. There is no dearth of bars and pubs in this fort city. Bars serve a good selection of beer and wine along with appetizers. Escape bar, Cheers bar, TASMAC on Katpadi road and another branch in Thottapalayam, Sri Vinayaka Cool bar, Hotel Darling, Fluid in Ranipet etc. are bars in Vellore.
Click here for the list of cinema halls and pubs in Vellore