Law and Order in any place is the most important factor for growth in economy and infrastructure of that place. In Vellore, the Vellore District Court is at Sathuvachari where law and order issues and other petitions are filed. The Consumer Court in Vellore too awards justice to aggrieved consumers.

The Madras High Court is the highest court in Tamil Nadu. There are 52 Judges in Madras High Court and a Chief Justice. Other courts functioning here include Labour Court, Court of Small Causes, State Transport Appellate Tribunal, Industrial Tribunal etc 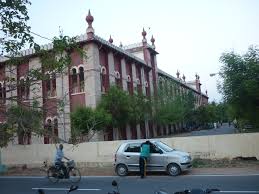 A Judge presides the District Court and awards justice at the district level. The administrative and judicial control of this court is under High Court of Tamil Nadu. In every district, the highest court is that of District and Sessions Judge. Here, civil and criminal cases are tried. Such a court can award any sentence including capital punishment.

There are other subordinate courts to the court of District and Sessions Judge. The court of Judicial Magistrate is the lowest criminal court. They decide criminal cases which are punishable with imprisonment up to 5 years.

The court of Civil Judge (Junior Division) is the lowest on the civil side. Such a court decides civil cases of small pecuniary claims.


Ronald Regan has said, ''Freedom prospers when religion is vibrant and the rule of law under God is acknowledged.'' True, Law and Order should establish justice in society.

Details of Courts in Vellore District

Get below the names of district judges from past till the present:

Explore more about Administration in Vellore