Vellore is the administrative headquarters of Vellore district. For proper administration, third-grade Municipality was constituted in the year 1866 under Town Improvement Act, 1865. It was upgraded to first-grade in 1947, selection-grade in 1970 and became a full-fledged Corporation on 1st August, 2008. This civic body is bestowed with governance and administration in Vellore city.

There are 60 wards in Vellore Municipal Corporation. Each ward comprises of an elected councillor who enjoy legislative powers. This legislative body has an elected Mayor at the helm. Deputy Mayor assists the Mayor. Municipal Commissioner is the executive head under whom various departments function.

Vellore Lok Sabha Constituency had 6 Assembly constituencies prior to 2009. However, after delimitation in 2009, it includes Anaicut, Gudiyatham, Vellore, Kilvazhithunaiankuppam, Vaniyambadi and Ambur.

You can avail of on-line citizen services for downloading forms, receive certificates, view tenders, pay your bills and even acquaint yourself with the functioning of various departments - all from the comfort of your home. It renders accountability and transparency in the working of diverse departments.

Know more about e-governance in Vellore 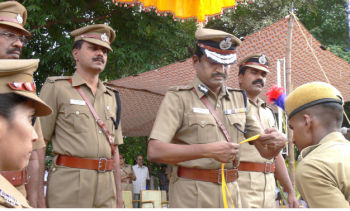 Law and Order in Vellore

Tamil Nadu Police is always vigilant in maintaining peace, law and order in Vellore. There are four police stations in the city which include one all-women police station. You can even register a complaint online! Police personnel are trained to address internet frauds, ensure the safety of women and children and patrol commercial and residential areas and preserve harmony among people. The police upholds social justice and human rights but strives to take strict action against law offenders.

The Central Jail in Vellore was established in 1867 and is the largest Jail in Vellore district. Weaving is the main industry carried out by convicts here who weave table cloths, carpets, clothes, choir mats etc. Skills such as shoe making, carpentry, brass work, tent making etc. The sub-jail attached to this central prison houses under-trial prisoners or those kept in remand.