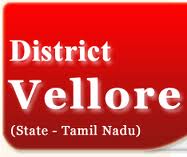 Welcome to the city that's carved for service to mankind, that has a cultural heritage so rich that each temple, fort and pillar speaks out its history loud and clear! With research centres, hospitals, law, medical and IT colleges, you want to dub it as an educational hub. Wait a while till you visit the twenty plus temples in Vellore district and you will change your mind!

This third most populous district (following Chennai and Kanchipuram) in Tamil Nadu State is a wonderful cocktail of tourist places, famous health centre, old forts with the punch is added by power play of many dynasties in Vellore in the past. The  Cholas, Pandyas, Vijayanagar, Pallavas, Hoysalas, Chalukyas, Sambhurvarayars, Mughals, Bijapur Sultans,  Marathas, French and the British - Yes! Vellore has been ruled by all of them during some part of its history!

'Vel' in Tamil language means spear - Lord Murugan's weapon and 'oor' means place. According to a legend, Lord Murugan, the tribal hunter, appeared from a lotus pond to attack his enemies. Some people also believe that the city is called Vellore due to the presence of Velan trees (Babul trees).

This fort city, located on the banks of Paklar river, represents early Dravidian civilization. There are around twenty forts and palaces here including the famous Vellore fort which was built in the 16th century and is a national monument since 1992. Famous places and palaces in Vellore which still stand to tell you the tale of rule and reign include Abdullah Khan Palace where Marathas jailed last of the Bijapur Generals, tombs of Sri Vikrama Raja Singha (last king to rule Kandy in Sri Lanka) and his queens and the graveyard of family of Tipu Sultan. 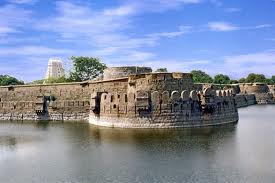 There is a church, a mosque and a temple inside the fort. Rebellion against British rule first started in 1806 from this fort. The state government museum in the fort was opened for general public in 1985. Here, weapons, wood carvings, artifacts etc. have been showcased for visitors and research scholars.

Vellore is not entirely a tourist hub; it is more an educational city or medical centre. However, once you visit this city, you should surely take out time and see Vellore fort, the Golden temple of Mahalakshmi (Lakshmi Narayani temple) at Sripuram (Malaikodi). Yelagiri hill station referred to as 'poor man's Ooty' with  Jallagamparai seasonal waterfall nearby too will leave a sweet fragrance behind in your heart. You can also enjoy a visit to the zoo, rejuvenate in the green cover of forests and enjoy the scintillating waterfall at Aamirthi (28 kms.)

About two hundred years back, in 1806, this city was the battle ground for Vellore Sepoy Mutiny. Thus, Vellore has reserved a significant status in the history of struggle for independence of India.


Religion and Languages Spoken in Vellore

Although people follow different religions here which include Islam and  Christianity, major population follows Hinduism. Tamil is the principal language spoken. However, since Andhra Pradesh is near, Telugu is also spoken by some people. Urdu is spoken in areas where Muslim population resides which comprise of areas such as Arcot, Wallajahpet, Ambur, Vaniyambadi and  Paradarami.

National Highways in Vellore are NH-46 (Bangalore-Chennai road) and NH-4 from Ranipet to Chennai and the Cuddalore-Chittoor.

Vellore is connected with major cities in the states of Tamil Nadu, Andhra Pradesh and Karnataka by effecient bus service. There are two Bus Terminals in Vellore, namely, Town Bus Terminus near CMC Hospital and Central Bus Terminus (under Vellore Municipal Corporation). Bus terminals are also located in Chittor, Bagayam and Katpadi.